You are here: Home / Archives for leonardo fioravanti

After a few weeks with a crosswind, Coxos woke up and did it in a big way. Some of the best surfers, after the WSL stop in Peniche didn't want to miss the swell, with Leo Fioravanti that scored one of the best waves we have seen in this spot. Riders: Leo Fioravanti, Frederico Morais, Miguel Blanco, & more … END_OF_DOCUMENT_TOKEN_TO_BE_REPLACED

The debut Olympic Surfing competition is on the cusp of history, set to crown the first-ever Olympic Champions on July 27. 8 women and 8 men remain in the running for medals, with the finals scheduled to run Tuesday at Tsurigasaki beach. Among the Gold Medal contenders are proven stars and determined underdogs looking to make their nations proud. Brazil’s Gabriel … END_OF_DOCUMENT_TOKEN_TO_BE_REPLACED

Surfers officially joined the action at the Tokyo 2020 Games on July 25, riding the historic first waves ever in Olympic competition. The world’s best surfers hailing from 18 countries around the globe took to the water at Tsurigasaki beach to display the youthful, high-performance values of Surfing to the widest global audience to ever witness the sport. Two of the … END_OF_DOCUMENT_TOKEN_TO_BE_REPLACED 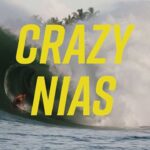 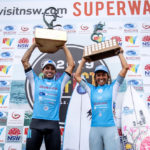 Sally Fitzgibbons (AUS) and Alex Ribiero (BRA) have claimed victory at the 34th annual Newcastle Surfest, World Surf League (WSL) Qualifying Series (QS) 6000 event in excellent waves at Merewether Beach. The two had to battle through a huge field of surfers from all over the world to claim the first combined QS6,000 of the season. Sally Fitzgibbons … END_OF_DOCUMENT_TOKEN_TO_BE_REPLACED