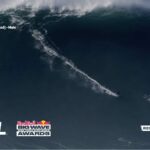 Today, the World Surf League (WSL) released the official list of nominees for the 2022 Red Bull Big Wave Awards. $350,000 in prize money will be awarded across three categories for men's and women's divisions: Ride of the Year, Biggest Tow, and Biggest Paddle. The winning photographers and videographers will also be awarded prize money. In addition to announcing the … END_OF_DOCUMENT_TOKEN_TO_BE_REPLACED