You are here: Home / Archives for skateboarding 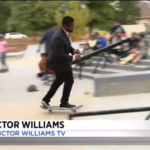 Victor Williams, a reporter in Detroit, clearly felt pretty secure about his skateboarding skills. Confident enough to get on a board on live TV and deliver his report -- that’s how confident. This didn’t come as a huge surprise to his colleagues, who wrote online, “Those of us who know Victor here at WDIV-Local 4 and ClickOnDetroit are well aware of his skateboarding … END_OF_DOCUMENT_TOKEN_TO_BE_REPLACED

TONY ALVA, STACY PERALTA, PEGGY OKI AND MANY OF THE ORIGINAL CAST WEIGH IN ON THE FILM'S CREATION AND HISTORICAL IMPACT. Vans is proud to present A Look Back: DogTown and Z-Boys, a retrospective of Stacy Peralta’s award-winning documentary that marks the film’s 20-year anniversary. Directed by Glen E. Friedman alongside filmmaker Eric Matthies, A Look Back: DogTown and … END_OF_DOCUMENT_TOKEN_TO_BE_REPLACED 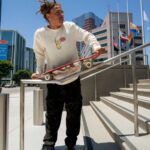 Vans Skateboarding presents the story behind Baker Skateboards pro Tyson Peterson’s journey from 11-year-old Florida skate prodigy to a true trailblazer in skateboarding. Tyson had some help along the way, from influential skaters to a support system of friends and family, ultimately getting him to where he is today. This short film delves into Tyson’s ascent to pro and the … END_OF_DOCUMENT_TOKEN_TO_BE_REPLACED 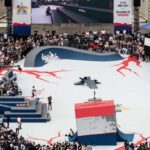 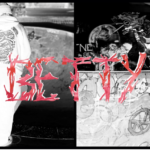 Vans Europe are excited to release Betty, the latest team video from the Belgian crew. What started as a little lockdown project with Harry Billiet and his homies, turned into a killer team-wide film after they knocked it out of the park for the best part of a year. Most of the scenes were filmed in Belgium, with a few in Luxemburg and … END_OF_DOCUMENT_TOKEN_TO_BE_REPLACED